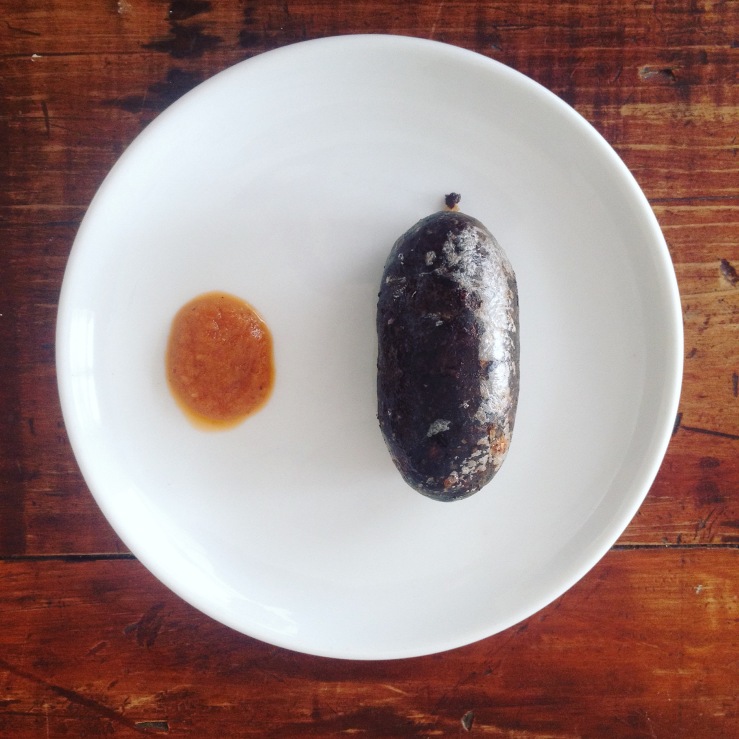 Sometimes the hardest step in the journey of a dish from brain to plate is deciding what to call the damn thing – a comparatively recent problem. Back in the day, of course, even the finest of chefs would have cooked a menu of the classics, and the names as well as the recipes and presentation would have come straight from Escoffier; now originality is expected everywhere, and if high-flung menuese and its attendant plague of adjectives has (thankfully) become a thing of the past, then the current style of [ingredient, ingredient, ingredient] or [ingredient & ingredient] can be just as demanding. Commas or ampersand? What order? In such a sparse form, the scanty information you do give away becomes vital. Do you acknowledge the artichoke is raw, the mackerel is cured, the chilli is fermented, the yoghurt is seasoned, the chickpeas are spiced, the croutons are absent? Or do you leave the nitty-gritty to front of house, who will (probably) get everything wrong anyway?

This gets even harder when you start making things up. A chicken breast is a chicken breast, no matter what combination of cured and fermented items you put it on a plate with. What to call boiled pigs’ lungs, minced with onion and stuffed into intestine? This is a similar preparation to a haggis, of course, but the chieftain of the pudding race is made with sheep offal (the whole pluck, ideally) and stuffed into a stomach; I think you could get away with one change to this formula, but not two. Pig offal stuffed in a stomach, I’d happily call a pork haggis. Conversely, lamb offal in sausage form would make a good haggis sausage. A pork haggis sausage, though, is just silly. A pork light sausage? A pork offal sausage? I’d expect some liver in that, personally. A pork lung sausage? These get less appetising. I find myself wishing I’d put some blood in the mix so I could call it black pudding and have done. Pudding might be the way to go – by the time the things are grilled they’re barely sausage-shaped anyway – but I’m not sure the term is generally understood in that way, black and white puddings as well as the aforementioned chieftain notwithstanding. Offal pudding? Light pudding? You see my problem. The things are sitting in the freezer now, awaiting only a name.

I am 90% sure that no-one will ever follow this recipe.

the lungs and windpipe of two medium pigs

Put the lights in a big pot with the stock vegetables and cover with water. Bring to a simmer and leave there for several hours, skimming the scum off from time to time, until the windpipes are very soft. Fish out the lights with a spider or similar and leave to cool a little, then pick through them, tearing the lungs into chunks and discarding the hard parts of the windpipe.

At some point during this, slice the onions and cook them with a pinch of salt in a little oil until very soft and golden, which will, as I’m sure I’ve mentioned before, take a while. Add the cooked onion to the offal, weigh the lot and add 2% salt by weight. If you have a kilo, for example, add 20g of salt. Add a good teaspoon or so of ground pepper, then blitz until fairly smooth and stir in the buckwheat. Chill overnight.

Stuff into sausage skins (or get your friendly butcher to do it), then place the whole link in a pan, cover with cold water, and poach very gently for 15 minutes. They can now be kept in the fridge or used immediately; either way, oil them a bit and grill, turning a couple of times, until the skins are shiny and starting to brown. Eat with fermented tomato ketchup and maybe a hash brown or two.

5 thoughts on “By Any Other Name”