Back, recently, from a trip to Naples, where despite the pungent cheese shops, the dripping, writhing fish stalls, the oily black coffee, the dangerously rich ice-cream, the puffy delights of deep-fried pizza, the foods that really stick in the mind are the vegetables. (Well, the stewed tripe was pretty memorable, but that’s another story.) Like Sicily, Naples has always been poor, and even flour might be too expensive, especially once those polenta-eaters up north had got a taste for pasta. So the Neapolitans, derided as leaf-eaters (a lot of Italian regional prejudice seems to revolve around food), had to fall back on what they had – which, luckily, was an astonishing abundance of fruit and vegetables. The British version of Italian food has tended to focus on pasta, and the meat-and-cheese-and-olives side of antipasti – all delicious, of course, but they give a somewhat lopsided impression of the cuisine. The Southern love for bitter greens – at one meal, we had the Neapolitan signature, friarelli, as well as braised escarole and fiercely grilled radicchio (not green, true, but you get the idea) – is starting to make an impression here, which is good. It suits our vegetables, as well as the small-plate style a lot of newer Italians are turning to. The ubiquitous vegetable antipasti are perhaps a little naffer, but still worth checking out. No-one’s going to get excited about a roast pepper, but that doesn’t mean it’s not nice to eat.

A lot of this, though, does rely on the afore-mentioned astonishing abundance of fruit and vegetables, which, in most cases, are significantly better and significantly cheaper than you can get in Britain. In Naples, they pretty much give away that roast pepper – dressed heavily in oil, sprinkled with capers – which here would be ruinously expensive. So you get the slightly unpleasant spectacle of new London restaurants offering up cucina povera at new London prices – and doing it rather badly, because the raw materials weren’t good enough to start with. If your pepper isn’t beautiful, do something else with it – and accept that that something might not be especially cheap. Why should it be? It’s not YOUR peasant cuisine. Feel free to live on turnips and gruel. Anyway, for a dish that relies slightly less on freshness and quality (slightly, mind you), as well as appealing to the deep British love for sweet pickles, you could do a lot worse than caponata. I think originally Sicilian, we had this in Naples too, and it ticks a lot of Southern boxes – the vegetables, the sweet-and-sour flavours, the prodigal use of olive oil – though I warn you again that it won’t be very cheap. Buy the veg from a market or greengrocer, and the oil in large quantity from a wholefood shop, and you’ll lessen the burden slightly. Supermarkets seem to conspire against this kind of food.

CAPONATA
This is a very Italian, high-summer caponata – they change the vegetables according to the season, little artichokes being a particular favourite. The only real constant is the agrodolce, sharp-sweet sauce. Feel free to sub in more ‘British’ veg (a glut of courgettes might find a home here) as you wish.
Makes a lot, but keeps well under its oil.
4 large mild onions, finely diced
6 cloves of garlic, sliced
1 red chilli, sliced
6 large vine tomatoes, diced, skins and seeds and all
200ml red wine vinegar
3-4 tbsps sugar or honey
Juice of two lemons
A handful of capers
A handful of raisins
4 aubergines, chopped into little dice
1 head of celery, trimmed and chopped into chunks
Chopped mint and parsley
Salt, pepper, and LOTS of olive oil

Make the sauce first. Sweat the onion, garlic and chilli (tuck in the vine from the tomatoes as well) in a hefty glump (bigger than a glug) of oil, until soft and nearly turning brown, then add the diced tomatoes and a pinch of salt and cook down to a mush. Stir together the vinegar, sugar (or honey) and lemon juice, then add that too and boil down a little. Taste – at this point it should be too sweet and too sour, without enough salt to balance it. That comes later. Stir in the capers and raisins.

Put the diced aubergine in a colander and toss with a big pinch (about a tablespoon) of Maldon’s salt. Leave to drain for about half an hour. (This is NOT to get rid of ‘bitter juices’, but to lightly break down its spongy texture, drying it slightly and making it absorb less oil. It makes quite a difference.)
Meanwhile, heat another glump of oil in a frying pan and sauté the celery, in batches, until nicely browned. Scoop out with a slotted spoon (although you’ll probably still need to top the oil up) and chuck straight into the sauce. Do the same with the aubergines – which will need even more oil – when they’re ready.
Let the whole thing simmer for about ten minutes, then stir in the herbs (a good handful of each) and leave to cool to a warm room temperature, then check the seasoning. It might need a bit more salt, but there’s a lot on the aubergines. Eat with white bread and wine, and get it down your shirt. Get angry and go for a nap. You’re on holiday. 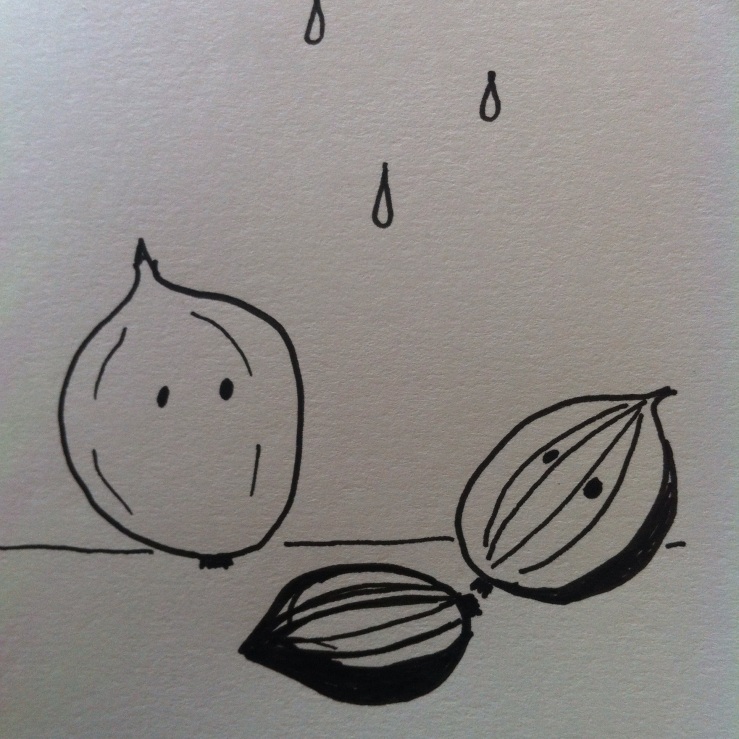 I’m not sure there is anything in all of world cuisine better than the smell of onions gently sweating in butter. (For once I’d definitely recommend it over lard.) Even the garlic you add half-way through, just as the smell is reaching its peak, only adulterates it. I was obsessed with it when I started to cook, trying to capture and prolong it as far as possible, trying to get as much of it as I could into the finished dish. The smell is nearly complete in itself, a heady oxymoron of fat and acid, carrying both deep savoury tones and a hint of sweetness which nods towards the dark, caramel browns of onion soup, but more than anything it is the smell of possibility. Think of all of the things those onions could grow up to be! Sauces, stews, the rich juices around a roast, pilafs and pastas, hashes and frittata and fricassees – onions (I’m including their relatives) are the basis of almost everything savoury and delicious. It’s a shame that recipes mistreat them so badly. The first thing to do when looking over any recipe is to double the time it tells you to cook the onions for. I’m not sure why this is the case. Whether the length of time actually required to sweat an allium down into soft, giving delight is considered off-putting for the amateur cook, or whether it’s instinctive Masonic secrecy on the part of food professionals I don’t know, but it’s certainly irritating. If you’re making, say, a tagine, which rests on heaps of sweetly browned onions, then you’ll need to cook them for at least half an hour – and that’s if you’ve sliced them thinly.

When preparing onions for this purpose, you should always slice the (halved) onions from root to tip, and (generally) do it as finely as you can. This smashes across the structure of the vegetable, leading to quicker breakdown and cooking (slicing the ‘other’ way, across the middle in half-moons, is best for pickles and salads, when you want to maintain structure) – and more tears, unfortunately. I’ve forgotten most of the methods I’ve heard to avoid crying over your dinner. The latest was to hold a metal spoon in your mouth while you sliced, which I haven’t tried for fear of looking ridiculous. None of the tips seem to work, anyway. You get used to it after a while. Think of it as a period of mourning, if you like – weep for the onion’s brief moment of glory, bathed in gently sizzling butter, before other flavours drown out its potential – weep for the lost dreams of your own childhood. All of the things you could have grown up to be! But here you are, an adult crying hot tears over a common vegetable. To console yourself, remember that the acids which stimulate your lachrymal ducts are what make the onion so useful. You could have – you wish, for a moment, you had – chosen a large, milder Spanish one, but you went for the small brown English, and your stew will be the better for it, your cheap braising beef lulled into submission by those sharp juices.

Not that the milder ones don’t have their uses. In general, the simpler your recipe is, the milder your onion can be – and should be, in onion-centric dishes. (Cooked ones, that is – a pickled onion can be as sharp as you like). The fat Spanish example sits well in a soup or, appropriately, a tortilla, where they are one corner in a trinity of ingredients, but when you really want them to shine, the small white-skinned Italian is best of all. These are becoming increasingly available here, and are worth getting, and shaping your dinner around, when you can. You can burn them in their jackets and dress the smoked-caramel innards in pomegranate, and have them with lamb; they are excellent in place of the ubiquitous red in salads and salsas; and they are glorious cooked down en masse to form the basis of sardines agrodolce, Venetian liver, or the Neapolitan salsa Genovese (some social history in that name, which I haven’t delved into). This last, particularly, almost succeeds in capturing that essence of onion in a pan (although it also contains meat, the latter acts more as a seasoning to the vegetable, heightening the deep umami of the onion rather than the other way round) – almost, but not quite. Probably nothing can. The ancient Greeks, with a laudably scientific approach, noted the gap in savour between the smell and the taste of their sacrificial meat, and concluded that the aroma, lost with the bubbling bone marrow, went to feed the gods. Hopefully, somewhere, a small and smelly deity grows fat on the fumes of a thousand onions, and blesses us for the feast.