If I were the sort of person to jump to conclusions, I might think that the above TripAdvisor user and self-described customer of Darsham Nurseries Cafe were an old-fashioned racist, the kind who thinks Turkish food begins and ends with dubious kebab shops, just as the sum total of Chinese cuisine can be found within the walls of the Golden Dragon; as it is, I will confine myself to the observation that he doesn’t know a huge amount about the food of the Eastern Mediterranean. If he did, he might join the dots between the plate of largely Stamboulite vegetable preparations he was served and the origins of the kebab, and figure out the bizarre reason why such a chilli might have adorned his plate; either way, he is certainly a snob, as anyone who professes a dislike for those “chillies you get in kebab shops” must be. For one thing, what he was actually served was Spanish guindillas, similar to those chillies you get in kebab shops, and for another, those chillies you get in kebab shops (CYGIKSs, from now on) are one of the finest of all pickles, a standout even in the impressive pickling world of Turkey. 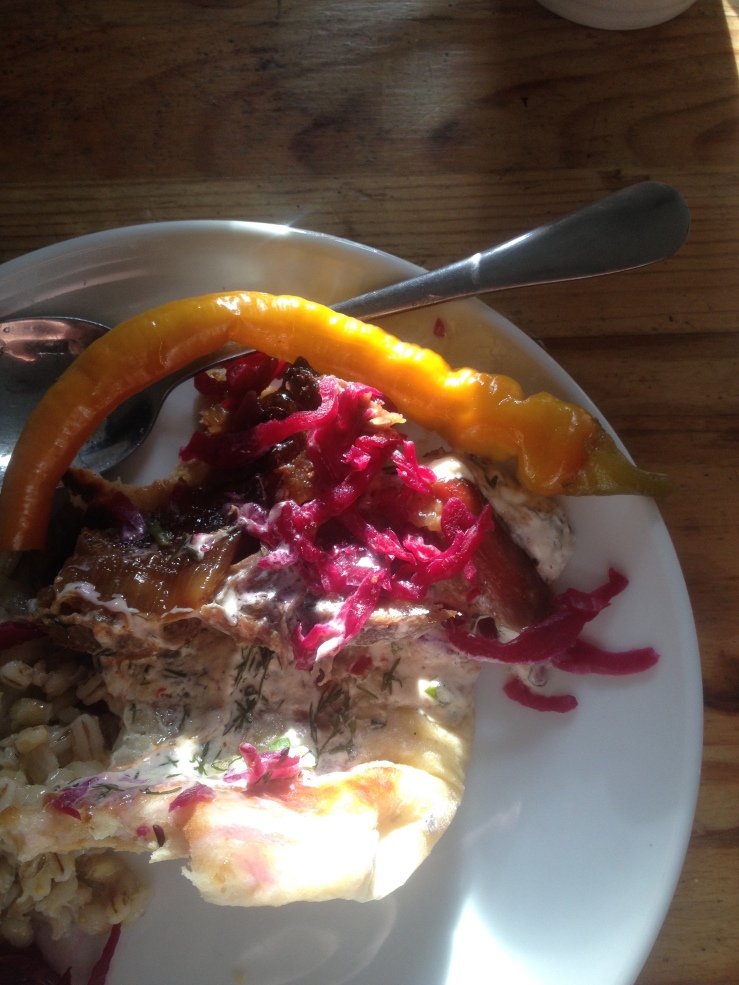 A good pickled chilli needs crunch, heat – but not too much heat – sweetness and sharpness and salt; it should be edible by itself with only a slight wince, so it can be eaten with abandon as a counterpoint to rich, fatty meats or sharp cheeses and nuts. The CYGIKS is a perfect expression of these qualities, and the Spanish guindillas we used to use at work are one of the closest equivalents that don’t come in 10l tins, for delivery, presumably, to kebab shops. I say ‘used to use’ not because the above review showed us the error of our ways but because we have started making our own, which, if anything, are even more like those CYGIKSs. We grow a huge number of sweet and chilli peppers at Darsham, among them the two main varieties used for CYGIKSs, the short stubby pale green ones and the long curly pale green ones. They probably have names, but I’m no expert. As it happens, I have spent a decent portion of the past four years perfecting my chilli-pickling method, starting with a frankly useless Jamie Oliver recipe and a box of generic greens and ending with a major breakthrough just as this year’s plants started seriously fruiting. We now have jar upon jar upon jar of the things, and they will be proudly adorning our mezze for many months to come.

This is more of a method than a recipe. As a general-ish rule, a 1l jar will take about 500g or so of chillies, which will need about 500ml of liquid to cover them. You’ll want to make loads, anyway, because they’re delicious.

Slit each chilli through one side of its flesh, all the way from stalk to tip, and pack them into a jar or crock. Pour water over them, then pour it off into a measuring jug – just to see how much brine you’ll need.

The brine is 3.5%, which is to say you’ll need 35g of salt and the same of sugar for each litre of water, so make this up, pour into a pan and bring to a boil, just to dissolve the solids. Let it cool to room temperature or thereabouts and pour over the chillies. Weight them down with something and leave to ferment for a week.

By now the brine should be cloudy with lactobacteria and the chillies should be crunchy and well flavoured. Drain them well and pack back into the jar.

For the pickle, you want 400g of sugar for each litre of vinegar – it helps to make a little extra up, to top up the chillies as necessary. Bring this mixture to a boil and pour straight over the chillies, remembering that hot acid hitting chilli seeds can sting the eyes a little (quite a lot, actually). Seal and leave for a week, then eat with your mezze or kebab.