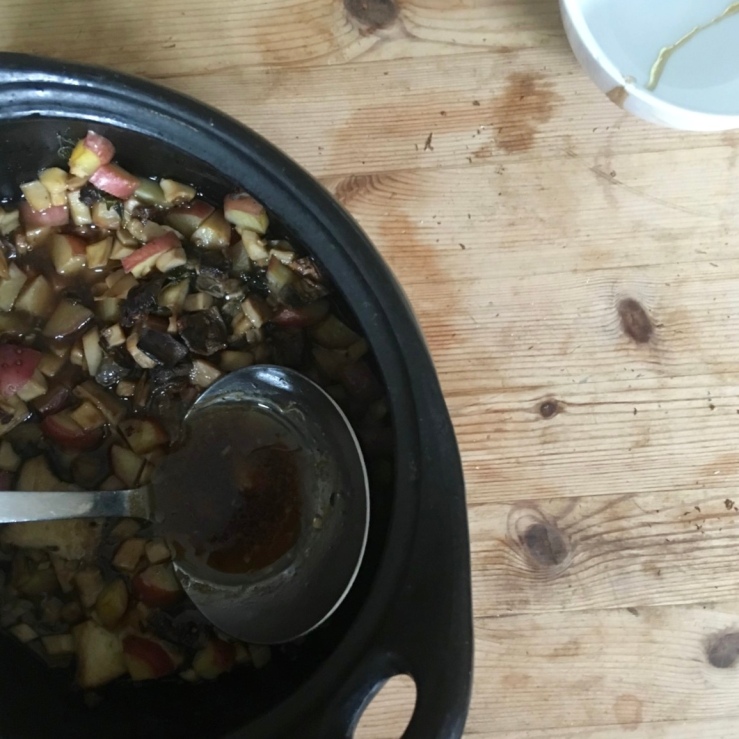 Sometimes coming up with a recipe or (to put it another way) cooking dinner requires a long and hands-on process of tinkering, of adding salt here, acid there, a little cooked-out tomato puree because you didn’t use enough to begin with, constant top-ups with water or quick reductions; sometimes it just opens up like a flower. In the latter case, although it feels like you are cooking with rare grace and skill the apparent ease is usually just because you are using four or five ingredients and doing very little to them; it can require more craft and skill to fix something already broken than to make it properly in the first place. Some things – a scrambled custard, a stew made with an unsweated mirepoix – are beyond repair, while some things require not fixing but rather a little nudge to give them a new lease of life, like a cleanly diced broth of mushrooms and potatoes given a handful of pasta and a squeeze of lemon, and eaten as a late breakfast on a cold day.

When you step outside to dump yesterday’s coffee grounds, to relieve the dog, to squeeze your curing hams or to otherwise do whatever it is you do first thing in the morning, and you find that the grass crunches underneath your feet and the sharp air catches in your nostril – when, in short, there is every sign that the ministry of frost has been busily fulfilling its duties overnight, it is time to think about boiling bones.

Although the health claims made for bone broth are dubious at best, the Jay Rayners of this world are wrong about one thing – it is not the same as stock. Not at all. A properly made stock has never risen above a simmer; it has been skimmed and pampered its whole life through, and the end result is eerily clear. A soup made with stock, with neatly diced vegetables cooked just-so in it, might be right for a summer day; a good bone broth, never.

I have some pork bones boiling up right now, in with a good smoked gammon hock – and they will be boiled. They will be cooked until the collagen and the fat breaks down and emulsifies with the water, which will be cloudy but glistening and almost tacky to the touch, like the pellicle on the skin of a drying mackerel. You can see, when you make broth, how bones become glue.

Personally, I rarely put in vegetables when I’m boiling ham and bones, though the skins of brown onions give a satisfying colour. As you’re normally doing something else with it, you can add the vegetables then, and give them a fighting chance to retain their integrity; not much outlasts the smoke and salt of a boiling ham hock. Today, when the broth is done I will sweat diced onion and carrots, add some pickled cucumber and its brine, then buckwheat and the broth and finally parsley, great handfuls of parsley and dill, and maybe some soured cream. I’ll share it with some good friends and some good beer, and we will know in our bones that it is cold outside and we are warm.