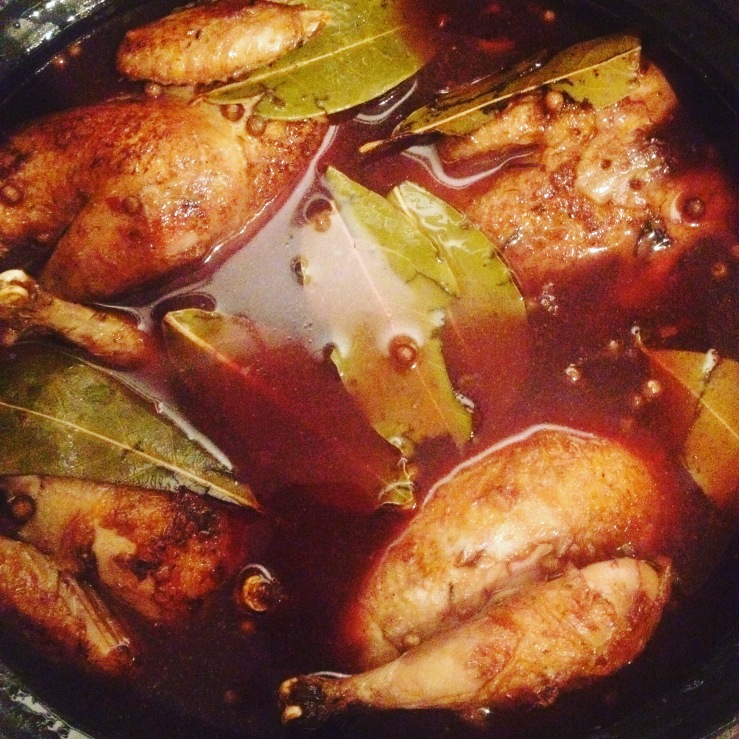 I’m sure I say this every year, but autumn really is an extraordinary time for British food. We spend the height of summer eating greenhouse tomatoes and endless gluts of courgette, wishing we were south of the thick black coffee line drinking something cold and pale in a cafe by the sea; it’s a season that we are not fully equipped to deal with, and so we spend it semi-conscious, drifting between shore and field in a sort of gentle fever dream, punctuated by ice-cream. Autumn, on the other hand, is the time to wake up. The hedges are making good on the promise of the early blackberries, with damsons, crabapples and soon sloes weighing down the spindly branches; country roads are once again teeming with semi-wild game birds, running idiotically between their Scylla and Charybdis of front wheel and gun. On the days after the first shoots, the flattened corpses of young partridge carpet the roads.

At least partridge tastes quite nice. The strange situation with pheasant is that these birds are bred in protected environments (often to the detriment of other, perhaps more native creatures), then released into the wild to be shot at, in such numbers that ‘hunters’ give them away for free; no-one wants to eat as much pheasant as can be killed, because, finally, it’s just not very interesting. A sort of dark white meat which dries out easily, it has none of the bloody excitement of a duck or pigeon, it’s too big to tear apart with your hands … to make matters worse, people often don’t prepare them properly, so the legs are full of tough sinews which must be picked laboriously from the meat. All in all, a waste of everybody’s time. If you do get given one, best to brine it in salty tea and then joint it so you can roast the legs slowly, the breasts quickly. Like all game birds, it goes nicely with a jelly or compote of appropriate fruits.

The chickenish paleness of their flesh is, I assume, due to both their early captivity and to their lifelong habit of walking everywhere, even out of the way of oncoming cars; it is certainly shared by the similarly-raised partridge, though the meat of these latter birds is somewhat finer, capable, I’m sure, of a rewarding blush when carefully and delicately cooked; I like to brown them in hot oil and then pickle them. This is a treatment native to Andalusia, but it seems appropriate for an English autumn, and as a recipe it is about as simple as that – just make up a vinegary brine, flavoured appropriately, and pour it, hot, over the browned birds. You don’t need to worry too much about acidity and salinity unless you intend to put them up in a barrel for the winter, in which case you are on your own; fermentation is one thing, but the sterile preservation of protein is fraught with danger. Just put them in the fridge and eat over a few days, and no-one will get botulism.

If you roast or stew your partridges, remember that, as with all pale, wild flesh, they will need a good helping of fat, having very little of their own, either in layers or running through the meat. It’s traditional to roast such birds covered with little strips of streaky bacon, which the cook can then silently eat while preparing the accompaniments; another way is to wrap them in prosciutto or similar and pack them tightly into a casserole for pot-roasting. I once cooked this for Julian Assange, oddly, though I don’t know if he liked it. He certainly never came back. I don’t know if partridges traditionally hide in pear trees because they are themselves pleasingly pear-shaped, or even if they do so at all, but they certainly go nicely with pear, perhaps pickled; or possibly it is just the pleasure of the association. Either way, worth a try.

So much for these sort-of game birds. My own personal favourite is the pigeon, as I think I’ve said before, but as they are easily availably year-round, they don’t carry the seasonal thrill of, say, a nice mallard (smaller and neater than the fat, farmed Gressingham duck), which is what I happen to have in my fridge right now, next to the pot of pickled partridge. Duck is perfect with the sweet tartness of the season, the hedgerow fruits, the heavy, honeyed flavours; there are so many options that I’m not quite sure, having briefly considered Pekinese and Venetian treatments, what I should do with it. Duck and damsons sounds nice, but if you have any suggestions, I would be glad to hear them.