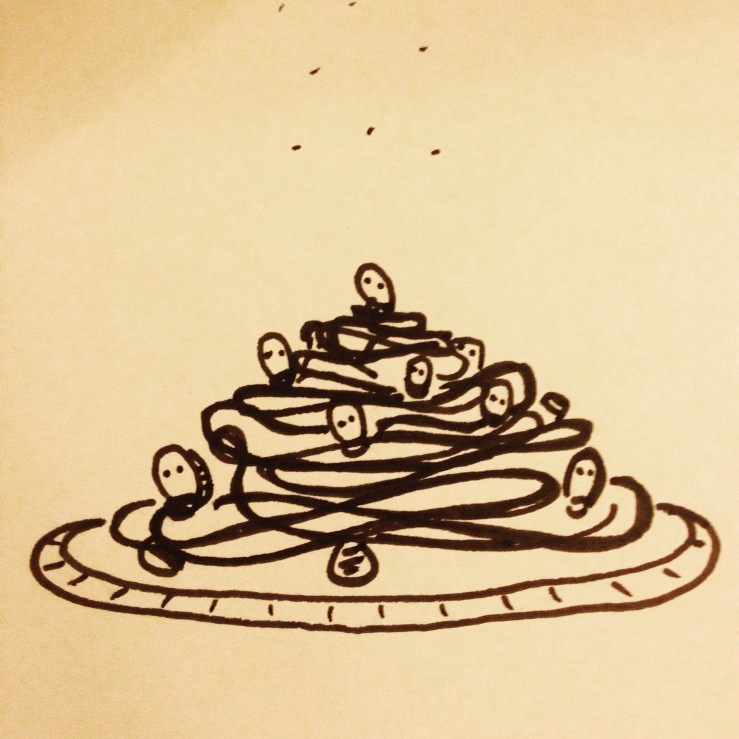 “In Esmeralda, city of water, a network of canals and a network of streets span and intersect each other. To go from one place to another you have always the choice between land and boat” – Calvino, trans. William Weaver

Venice, it’s fair to say, is a city mainly composed of bridges and water, a fact emphasised when you enter it, by vaporetta, on a chilly, rainy day in late February, the kind of day when the sky and the water seem composed of the same great sheet of grey. The canals lap at the seaweed-bearded streets; bridges appear out of nowhere, and any alley might lead equally to a church or to the sea. Why anyone chose to build a city there is beyond me, but I suppose they made a good go of it, becoming “excellently amphibious” in response to their waterlogged, sinking surroundings, bringing, for a while, large parts of the Mediterranean under the control of their largely mercantile empire.

I always find it fascinating to trace the history of a place through its cuisine; part of what I love about Sicilian food is the little touches of Arab and Spanish flavour, the faint whispers, even, of Roman and Greek – seemingly un-Italian spicings, sweet fruit and meat, the absolute ubiquity of the anchovy – but apart from the occasional flourish of cinnamon, little seems to remain of La Serenissima’s once-vital place on the spice route. Apart from a few remnants of later occupations – the cream doughnuts and the peculiar Venetian lust for strudel – their cuisine is as amphibious as them, entirely a product of the lagoon and its immediate surrounds; which is to say that they eat a hell of a lot of fish.

Apart from breakfast, which for Venetians means an espresso and a cornetto and for us meant the bountiful purgatory of the Continental buffet, almost every meal we had was largely aquatic. The first night was cuttlefish in sticky ink, thick bigoli pasta in a dense sauce of anchovies, sardines in their beautiful sweet-sour bath, and simply boiled king crab; the next, tiny, toy-like octopus and spaghetti vongole; for lunch, the little soft-shelled local crabs, no bigger than the palm of your hand, which stuff themselves with Parmesan batter in a morbid frenzy before a quick end in hot oil. In between, very often, there was baccala. Although, as far as I can gather, this is made with stockfish rather than salt cod – that is to say, dried without being salted, giving it all the hairy texture without the sometimes overpowering flavour – it shares a lot, in its most common preparation, with the Catalan brandada and the French brandade.

Although all these (and salt cod in general) seem totemically Mediterranean dishes, they are essentially a product of trade, early fusion cuisine. The fish, from cold and teeming northern waters, was salted and dried on cold Scandinavian beaches, in dry Scandinavian winds, travelling almost to the other end of the known world to be revived and mixed with good southern olive oil and cracked eastern pepper – and, for the last few hundred years, served on grilled cakes of ground Mexican corn.

I make my own salt fish (normally with hake or ling, for various reasons) but don’t generally dry it; I’ll give that a go, and work on a recipe for baccala mantecato. In the meantime, look for Russell Norman’s POLPO recipe; or go and eat it at Polpetto, where it is perfect.