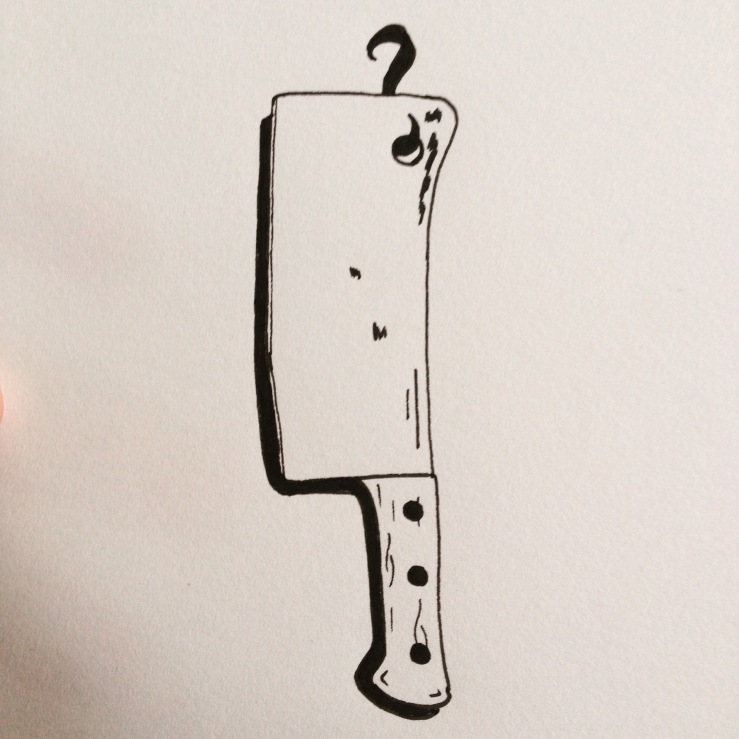 One of my favourite phrases in modern food writing is, appropriately, found in probably my favourite cookbook, Fergus Henderson’s Nose To Tail. In a recipe for a kind of stewed sauerkraut, he asks the cabbage be cut with a “good big knife” – an excellent three words, suggesting that the goodness of the knife is inextricable from its bigness; which, of course, it is. Sharpness he doesn’t feel the need to mention – that’s there in ‘good’. It’s easy to think of big knives as the protuding egos of (often male) chefs, or, more charitably, as something desirable in a professional but unnecessary in an amateur situation; this is true, perhaps, in a way – but only in a way.

The thing about a large knife is it doesn’t just let you do things faster, although it does do that – slicing an onion, to take the most obvious example. There are also things which a good big knife allows you to do much better. Slicing that cabbage, for example, especially if you have a particularly large white, or one of those flat wide ones meant for stuffing, slicing it good and thin, is very difficult without a knife at least eight or ten inches long, with a wide blade to keep your knuckles from hitting the board. Chopping herbs well and finely, in sufficient quantity to be useful as a flavourant rather than just a garnish, is something that can only be done with a large knife – or a mezzaluna, I suppose, but if you’re going to buy one of them you may as well just buy a knife.

You know all this, I’m sure. Everybody, or at least everybody with an interest in cooking, which, presumably, you do, knows this; but the point is that acquiring a knife and the skill to use it is not just a technical achievement – it allows you to cook different things, and to cook them differently. It broadens your mental palate (palette?). The whole wok-driven side of Chinese cuisine, as Bee Wilson persuasively argues in Consider The Fork, rests on the knife skills required to chop things into tiny, uniform pieces, using one of those gigantic cleavers; if you’ve ever seen Eat, Drink, Man, Woman, you’ll realise the control and strength required.

Or, I’ll repeat, herbs – you can’t use herbs as they should be used, as great fistfuls of bright, green freshness, without a good knife. Don’t use those ridiculous 30g packs from the supermarket, either. Get a large bunch of parsley from a greengrocer, a market stall, or your Local Ethnic Food Emporium, pick the leaves off, put the stalks aside for flavouring stock, sauce, soup, pulses, or pickles; get your good big knife, and make this.

a pinch of capers

8 cornichons or one gherkin

a splash of red wine vinegar

Finely chop the parsley. Some mashing is acceptable and even desirable, so this is a good recipe to practice chopping on. Go over and over the herb with your knife, until it is very fine. Put in a bowl. Finely chop the garlic, sprinkle over some salt, and then crush to a paste with the side of your blade; this is very satisfying.

Add the garlic and the capers to the bowl; chop the cornichons, fairly roughly if you like, and the anchovies, if you’re using them, and put everything in the bowl. The amount of oil you add depends on how saucy you want your sauce; I often keep it quite dry, capable of standing up by itself, for topping fried or grilled things. If you’re stirring it into soup or ragout, you might want it a bit sloppier. It’s your sauce.