I think some of the best restaurants exist within imagined worlds. Sometimes this is simply the idealisation of memory – Russell Norman’s Polpo, for example, creates a version of Venice surpassing the original, largely from the raw materials of his own rose-tinted memories. Taken a little further, restaurants can provide an idealised version of something which never existed in the first place – to stick with Norman’s group, his Spuntino creates the perfect Italian-American neighbourhood bar, all bitter cocktails, mysterious shellfish, rich pasta and deep-fried treats, which would be unrecognisable to anyone who has endured a red-checkered red sauce joint in the wrong part of town.

These restaurants, and others – Pitt Cue being a good example – are prime hipster locations, where context is an important as content. The food, while always strongly themed and very well executed, does not need to be groundbreaking as it is not the whole of the story. When you dine at Pitt Cue Co., you aren’t just eating pulled pork – you are imbibing a whole culture, of PBR, snap-back caps, beards, plaid and Southern rock – a fantasy of US barbecue culture that has already been filtered through East Coast hipster culture before it arrives here.

Other, more interesting restaurants manage to apply this sleight-of-hand to an entire cuisine. Look at St. John and its subsidiaries. “A Kind Of British Cooking”, the recipe books tell us, and Fergus Henderson’s writing emphasises this, highlighting the skills and recipes he learned from his parents and grandparents while ignoring his own background in French classical cuisine, as well as the then-fashionable southern European influences he imbibed at the Eagle. The result, particularly, I think, at Bread & Wine, is a delicate fusion that dare not speak its name, a recreation of a traditional British cuisine that never actually existed.

With all this in mind, I was thinking about the similarities – briefly mentioned, but never fully explored, in the Pitt Cue book – between American barbecue and Turkish cuisine. Both are cultures of pickle and smoke, of intense meat and charcoal cut through and balanced by crisp vegetables and sharp, sweet liquors. They even drink pickle juice as a pick-me-up in Turkey – although without the bourbon first. Imagine the perfect Turkish-American diner … the short-order cook a moustachioued usta, the hashes spiked with biberi pepper, the chopped salad laced with sumac … This dinner was the result of these imaginings.

Pastirma is a Turkish dry-cured beef, similar to bresaola, but coated in a clay-like spice paste for the final stage of the curing process. Here, the same spices are turned into a barbecue dry-rub.

Make up a brine with 1 litre of water, 120g of salt, and 15g of sugar. Immerse the brisket in this for three days. When it’s ready, dry it off with kitchen towel and leave in the fridge, uncovered, for six hours or so to dry further.

Grind the whole spices and mix with the rest. Rub liberally all over your brisket, wrap in clingfilm, and leave in the fridge overnight.

This entirely depends on your cooking arrangements. I used a stovetop smoker, which I loaded with a mix of hickory and apple, and smoked the brisket for 2 hours before finishing in a low oven, covered, with a little liquid. If you have a decent barbecue you could do the whole thing on there; alternatively, you could do it entirely in the oven. It won’t be quite as tasty, but you could add some urfa chilli or even some smoke powder to the dry rub to approximate the flavour. Whatever way you choose, it’s going to take a long time, so you’ve got a while to get on with the sides. 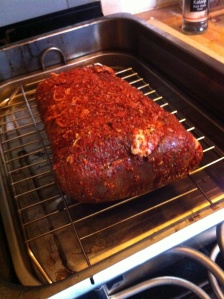 The Québécois pretend to a sort of European sophistication which eludes their dip-chewing, denim-clad, beard-sporting compatriots. Poutine, however, is their national dish. Make of that what you will. This is a happily bastardised version.

a knob of butter

1 pint of liquid (I used a mix of the meat juices, wine, and bought stock)

a big handful of feta cheese

Parboil the potatoes, then cut into whatever shape you like. Proper poutine is made with fries; I went for chunks. Oil, season, and stick in a hot oven.

While the potatoes are roasting, make the gravy. Melt the butter (in a pan, obviously), stir in the flour, and cook until it smells nice and biscuity. Add your liquid a bit at a time, stirring, and simmer until thickened. When you’re ready to eat,  pour the hot gravy over the hot potatoes and crumble over the feta.

This is adapted from Rebecca Seal’s lovely book Istanbul.

juice of one lemon

Slice the onion in half moons, then place in a small bowl, cover with vinegar, and sprinkle over a big pinch each of sugar and salt. Leave to macerate. Shred the rest of the vegetables. (If you’re doing this in advance, squeeze some lemon over the celeriac to stop it discolouring).

Whisk the tahini, lemon juice and garlic together with some salt until it turns creamy. The tahini will stiffen and split; persevere. Stir in the yoghurt.

A bit before you want to eat, mix together all the vegetables and dress with the tahini yoghurt. Let it down with a little of the onion vinegar if it seems claggy, and season appropriately.